This Krispy Kreme donut recipe creates melt-in-your-mouth donuts that you’ll savor every single bite of. Much like the original, this copycat recipe is topped with a lightly sweet glaze that rounds out the donut perfectly.

If you are in the mood to make donuts, you may also like my simple homemade sugar donuts, this quick fried donut recipe, or even my 15-minute ricotta donuts. 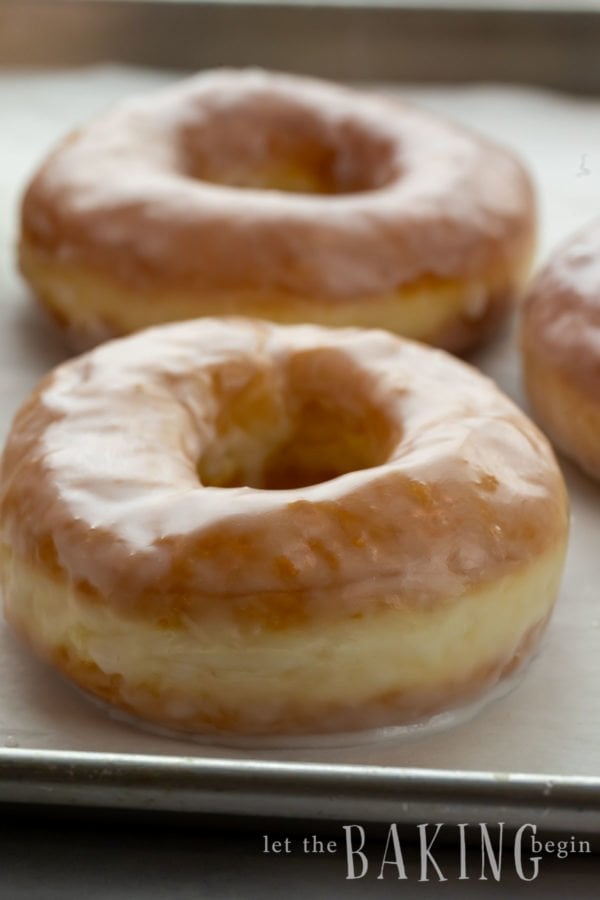 I call this a copycat recipe, but I need to be honest with you all…these donuts are better than the original. Way better, in my opinion!

It took some trial and error to get this donut to have that true Krispy Kreme flavor. I will usually make my donuts with butter in the dough, but to nail this copycat recipe I swapped it out for shortening. After another trial round (my job is so hard!) I thought it was still missing something and I finally figured out what it was.

Rather than fry these in oil, this copycat Krispy Kreme donut recipe should be fried in Crisco. Sure, if you don’t have Crisco on hand you can use oil, but if you really want that classic Krispy Kreme flavor, you’ll want to use Crisco.

Every bite of this copycat Krispy Kreme donut recipe fills your mouth with fluffy yeast donut. Just like the ones in the shop, these donuts are best when they are still slightly warm.. Yes, your fingers will probably get slightly sticky from the glaze, but it’s totally worth it! 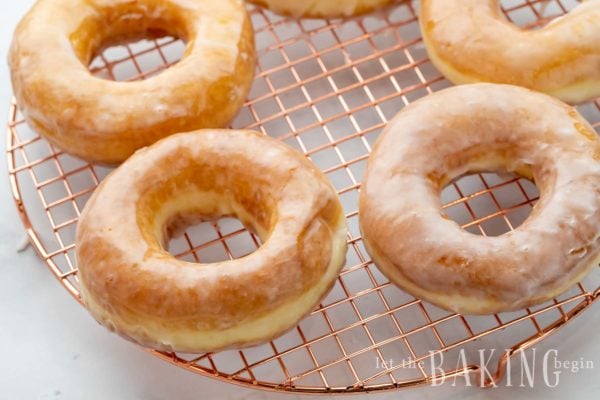 Let’s be honest. The other part of what makes these donuts so completely irresistible is the glaze. This Krispy Kreme donut glaze recipe is super simple to make. It’s certainly sweet, but not overpoweringly so. When combined with the yeasty, airy donut, the glaze adds sweetness and flavor.

Plus, the Krispy Kreme donut glaze recipe only has three simple ingredients: confectioners’ sugar, milk, and light corn syrup. Make sure to get the light kind, because the dark syrup will make this glaze taste totally different from the original!

The best way I have found to get these donuts glazed properly is to put the glaze in a shallow bowl. Once the donuts have come out of the oven and cooled enough that the glaze won’t just slide off, you can use tongs to submerge half of the donut into the glaze. Flip it glaze side up, and let it sit on a cooling rack for a few minutes before enjoying it! 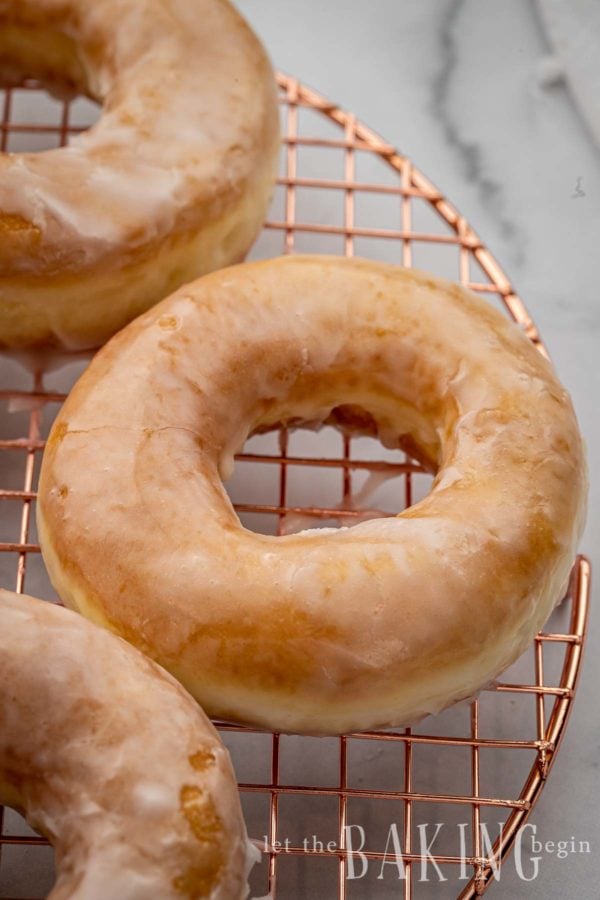 How to Make the Krispy Kreme Donut Recipe

For detailed recipe instructions see the recipe card bottom of the post.

Making this Krispy Kreme donut recipe has two separate parts: the donut, then the glaze. Here’s how to make each.

Scroll to the bottom for the full recipe with precise ingredient amounts. 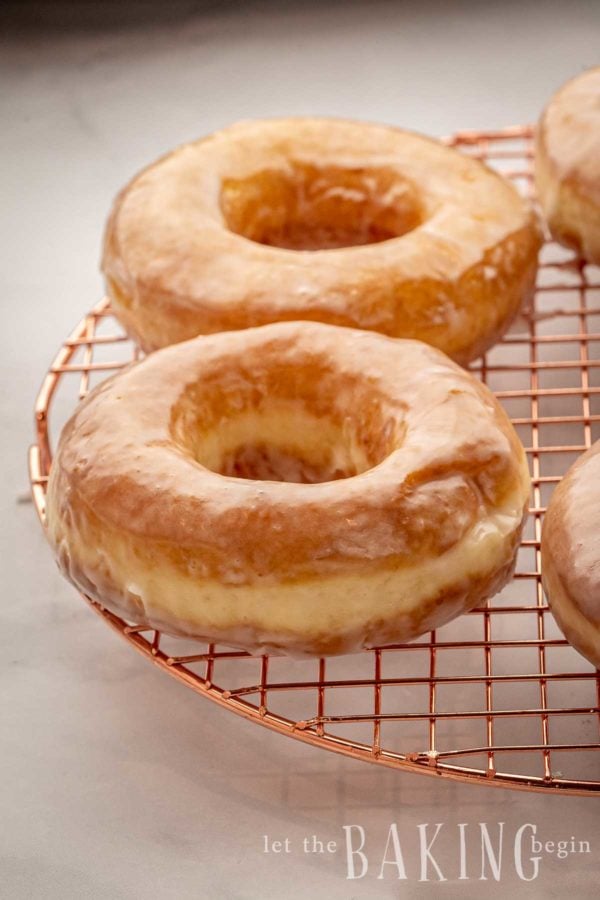 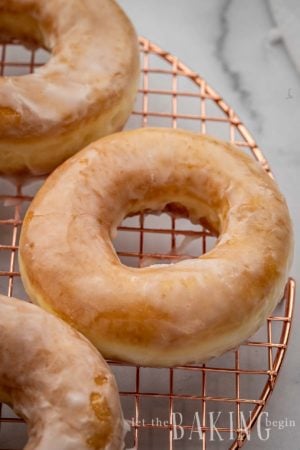 This Krispy Kreme donut recipe tastes just like the original! You'll be amazed at how simple it is to put together this dough to create an airy donut that's topped with a light glaze.

Mix with a mixer

How to make this Krispy Kreme donut recipe 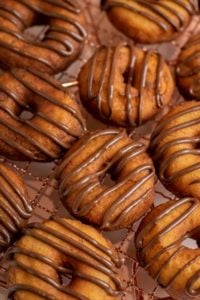 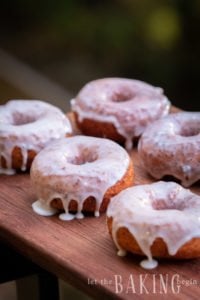 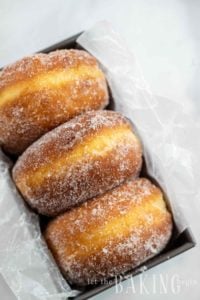 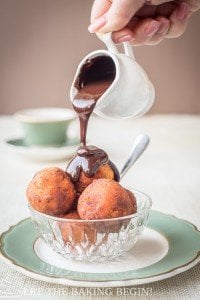 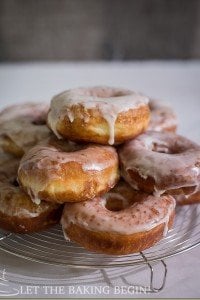