This Artisan Bread Dough recipe starts with 4 classic ingredients for a lean yeast dough that you can prepare in a variety of ways. Keep it in the fridge for up to 7 days and make bread, pizza, English muffins, piroshki, focaccia bread, and even flatbread throughout the week. Incredible flavor, amazing texture, and versatility to boot.

Whether you cook for just yourself or you cook for a family, there are some recipes that you should just know by heart because they’re your staples in the kitchen. This Artisan Bread dough recipe with easy-to-remember ingredients and catchy 4 – 2 – 1 – 1/2 ingredient amounts is definitely one of those.

Even though the word artisan can sound intimidating, I’m here to make the process simple and easy for you to understand and accomplish at home.

What is Artisan Bread?

Artisan bread is highly coveted for its amazing texture, flavor, and appearance. Crackly crust, moist, open air pockets of inner crumb full of wonderful aroma make you just want to put your nose up to the slice of bread and inhale slowly.

While there’s no regulation for what makes the bread artisan, there are several things that are expected when referring to a loaf as an artisan.

Artisan bread is typically handmade with lean (no enrichments such as fat and sugar, etc.) ingredients such as flour, water, salt, yeast, and no added chemicals.

Artisan bread’s flavor and texture are enhanced through long fermentation in both cold and warm environments which allows for both good bacteria and yeast to thrive deepening the complex flavors, improving texture, extending shelf life, and making it easier for our body to break it down.

Why you’ll love this bread dough

One of the best things about this dough recipe is the open crumb with large holes, chewy texture, and a crackly crust that it produces.

After the introduction of No-knead bread to the world by the New York Times, many people have tried their hand at the no-knead, no-fuss recipe. The simplicity of preparation was way too tempting and the end result was unbelievably good.

This artisan bread dough recipe is based on the same idea, but takes it up a notch with an additional step of stretching and folding the dough in the first couple of hours after mixing. This vital step will improve the texture of the bread, make air pockets larger and more uniform, make the crust gives you improves the extendibility of gluten in the dough which then helps it trap the air bubbles better, giving you an airier end result.

Another improvement to the well-known no-knead bread is to follow that recipe with a cold fermentation period (aka refrigeration) in addition to proofing at room temperature.

During the cold fermentation, the yeast activity slows down, which gives the opportunity for the bacteria to shine and do its thing. The lactobacilli lower the pH of the dough increasing bread’s shelf life, flavor, and texture.

This is also the time that enzymes start to break down gluten bonds. This not only improves the extensibility of the gluten (a.k.a allowing the dough to hold on to larger air pockets without collapsing) but also makes it easier to digest, which is especially important to those that have gluten sensitivity.

7+ other things to make with this lean yeast dough

I have tested this recipe for many things and here’re just a few things you can make with it: (the recipes of which are to follow). See instructions at the bottom of the recipe card below the post.

The way you shape, bake, or cook this yeast dough will make it taste different and nobody has to know that in essence, it all came from one single basic bread recipe. Make more than one batch of this at once and keep taking away from it to make different recipes throughout the week. How convenient is that?

***Scroll to the bottom for a recipe card for precise ingredient amounts and instructions.

4 – 2 – 1 – 1/2 is what you need to remember when trying to remember the amounts of ingredients that we use in the recipe.

So, 4 cups flour, 2 cups water, 1 Tbsp kosher salt, and 1/2 tsp active dry yeast. How do you remember the ingredients? Well, whatever the number you start with, you’ll have to keep dividing it by two as you go to the next number.

Yes, I know they’re not all the same measurement amounts (going from cups to tablespoons to teaspoons), but once you understand the logic behind the recipe, it will be easy to remember.

How to make the Artisan Bread yeast dough:

The dough starts out thick and chunky. After the first resting period it might even look loose and almost runny. But, after each stretching/folding and resting period the dough will look smoother and smoother as the gluten is strengthened. It will also hold a rounder shape immediately after folding with each round.
Compare first and last pictures below to see the smoothness of the dough.

How to invert the dough out of the container

Then, with wet fingers go around the perimeter of the bowl and loosen the dough from the edges.

Invert the bowl or container with the dough over the floured surface and allow the dough to slowly fall out of the bowl.

Use the dough as directed in the recipe.

Scroll to the bottom for the recipe card for the exact recipe and for ways to use and bake this dough.

How many days can this dough be kept in the fridge?

The dough can be kept in the fridge for up to 5 days. The optimal time for using the dough is between 3-5 days.

If you can not use it within 5 days, punch down the dough and you can keep the dough in the fridge for up to 2 more days. After that, the flavor and texture profile will deteriorate.

Can I make this recipe on the same day?

You can make it and use it the same day by sacrificing the flavor and texture. While it will still make good bread, pizza, and such, the depth of flavor will be lacking compared to the original artisan bread dough recipe.

To make and use the dough the same day increase the yeast amount to 2 teaspoons. This will speed up the proofing time which will leave no time for stretches.

To make up for it, the dough can be kneaded for about 15 minutes by hand or mixer after brining all of the ingredients together, or until the dough is tacky to touch and forms a dough ball around the kneading hook.

After kneading, the dough will need to be proofed until double in size, then used immediately after.

To make an Artisan Focaccia: 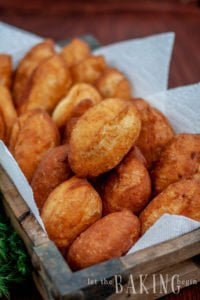 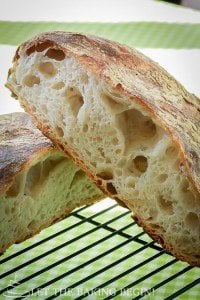 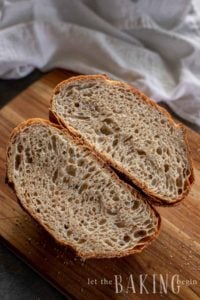 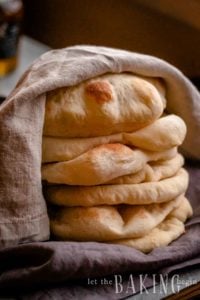 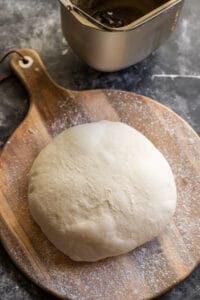